Bitslicing (in software) is an implementation strategy enabling fast, constant-time implementations of cryptographic algorithms immune to cache and timing-related side channel attacks.

This post intends to give a brief overview of the general technique, not requiring much of a cryptographic background. It will demonstrate bitslicing a small S-box, talk about multiplexers, LUTs, Boolean functions, and minimal forms.

Matthew Kwan coined the term about 20 years ago after seeing Eli Biham present his paper A Fast New DES Implementation in Software. He later published Reducing the Gate Count of Bitslice DES showing an even faster DES building on Biham’s ideas.

The basic concept is to express a function in terms of single-bit logical operations – AND, XOR, OR, NOT, etc. – as if you were implementing a logic circuit in hardware. These operations are then carried out for multiple instances of the function in parallel, using bitwise operations on a CPU.

In a bitsliced implementation, instead of having a single variable storing a, say, 8-bit number, you have eight variables (slices). The first storing the left-most bit of the number, the next storing the second bit from the left, and so on. The parallelism is bounded only by the target architecture’s register width.

What’s it good for?

Biham applied bitslicing to DES, a cipher designed to be fast in hardware. It uses eight different S-boxes, that were usually implemented as lookup tables. Table lookups in DES however are rather inefficient, since one has to collect six bits from different words, combine them, and afterwards put each of the four resulting bits in a different word.

In classical implementations, these bit permutations would be implemented with a combination of shifts and masks. In a bitslice representation though, permuting bits really just means using the “right” variables in the next step; this is mere data routing, which is resolved at compile-time, with no cost at runtime.

Additionally, the code is extremely linear so that it usually runs well on heavily pipelined modern CPUs. It tends to have a low risk of pipeline stalls, as it’s unlikely to suffer from branch misprediction, and plenty of opportunities for optimal instruction reordering for efficient scheduling of data accesses.

With a register width of n bits, as long as the bitsliced implementation is no more than n times slower to run a single instance of the cipher, you end up with a net gain in throughput. This only applies to workloads that allow for parallelization. CTR and ECB mode always benefit, CBC and CFB mode only when decrypting.

Constant-time, secret independent computation is all the rage in modern applied cryptography. Bitslicing is interesting because by using only single-bit logical operations the resulting code is immune to cache and timing-related side channel attacks.

The last decade brought great advances in the field of Fully Homomorphic Encryption (FHE), i.e. computation on ciphertexts. If you have a secure crypto scheme and an efficient NAND gate you can use bitslicing to compute arbitrary functions of encrypted data.

Let’s work through a small example to see how one could go about converting arbitrary functions into a bunch of Boolean gates.

If you’ve dealt with FPGAs before you probably know that these do not actually implement Boolean gates, but allow Boolean algebra by programming Look-Up-Tables (LUTs). We’re going to do the reverse and convert our S-box into trees of multiplexers.

Multiplexer is just a fancy word for data selector. A 2-to-1 multiplexer selects one of two input bits. A selector bit decides which of the two inputs will be passed through.

Here are the LUTs, or rather truth tables, for the Boolean functions fL(a,b,c) and fR(a,b,c): 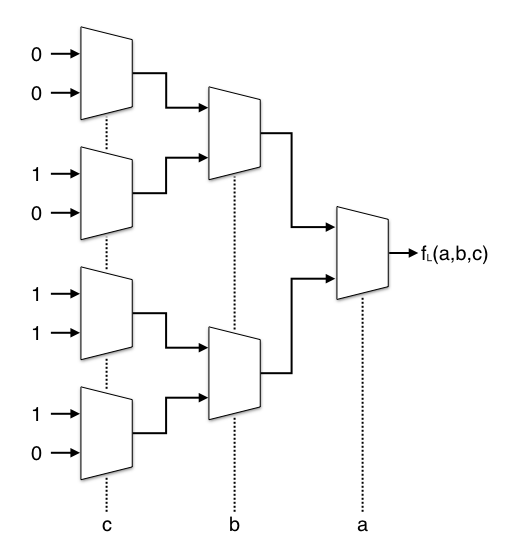 Let’s take the mux() function from above and make it constant-time. As stated earlier, bitslicing is competitive only through parallelization, so, for demonstration, we’ll use uint8_t arguments to later compute eight S-box lookups in parallel.

If the n-th bit of s is zero it selects the n-th bit in a, if not it forwards the n-th bit in b. The wider the target architecture’s registers, the bigger the theoretical throughput – but only if the workload can take advantage of the level of parallelization.

The two output bits will be computed separately and then assembled into the final value returned by SBOX(). Each multiplexer in the above diagram is represented by a mux() call. The first four take the LUT-masks 2Eh and B2h as inputs.

The diagram shows Boolean functions that only work with single-bit parameters. We use uint8_t, so instead of 1 we need to use ~0 to get 0b11111111.

That wasn’t too hard. SBOX() is constant-time and immune to cache timing attacks. Not counting the negation of constants (~0) we have 42 gates in total and perform eight lookups in parallel.

Assuming, for simplicity, that a table lookup is just one operation, the bitsliced version is about five times as slow. If we had a workflow that allowed for 64 parallel S-box lookups we could achieve eight times the current throughput by using uint64_t variables.

Now there still are three gates, but the new version lends itself often to easier optimization as we might be able to precompute a ^ b and reuse the result.

Let’s optimize our circuit manually by following these simple rules:

With the new mux() variant there are a few XOR rules to follow as well:

Using the laws of Boolean algebra and the rules formulated above I’ve reduced the circuit to nine gates (down from 42!). We actually couldn’t simplify it any further.

Finding the minimal form of a Boolean function is an NP-complete problem. Manual optimization is tedious but doable for a tiny S-box such as the example used in this post. It will not be as easy for multiple 6-to-4-bit S-boxes (DES) or an 8-to-8-bit one (AES).

There are simpler and faster ways to build those circuits, and deterministic algorithms to check whether we reached the minimal form. One of those is covered in the next post Bitslicing with Karnaugh maps.