You have probably read that Facebook unveiled its hidden service that lets users access their website more safely via Tor. While there are lots of opinions about whether this is good or bad I think that the Tor project described best why that is not as crazy as it seems.

The most interesting part to me however is that Facebook brute-forced a custom hidden service address as it never occurred to me that this is something you might want to do. Again ignoring the pros and cons of doing that, investigating the how seems like a fun exercise to get more familiar with the WebCrypto API if that is still unknown territory to you.

How are .onion names created?

Names for Tor hidden services are meant to be self-authenticating. When creating a hidden service Tor generates a new 1024 bit RSA key pair and then computes the SHA-1 digest of the public key. The .onion name will be the Base32-encoded first half of that digest.

By using a hash of the public key as the URL to contact a hidden service you can easily authenticate it and bypass the existing CA structure. This 80 bit URL is sufficient to prevent collisions, even with a birthday attack (and thus an entropy of 40 bit) you can only find a random collision but not the key pair matching a specific .onion name.

So how did Facebook manage to come up with a public key resulting in facebookcorewwwi.onion? The answer is that they were incredibly lucky.

You can brute-force .onion names matching a specific pattern using tools like Shallot or Scallion. Those will generate key pairs until they find one resulting in a matching URL. That is usably fast for 1-5 characters. Finding a 6-character pattern takes on average 30 minutes and for just 7 characters you might need to let it run for a full day.

Coming up with an .onion name starting with an 8-character pattern like facebook would thus take even longer or need a lot more resources. As a Facebook engineer confirmed they indeed got extremely lucky: they generated a few keys matching the pattern, picked the best and then just needed to come up with an explanation for the corewwwi part to let users memorize it better.

Without taking a closer look at “Shallot” or “Scallion” let us go with a naive approach. We do not need to create another tool to find .onion names in the browser (the existing ones work great) but it is a good opportunity to again show what you can do with the WebCrypto API in the browser.

To generate a random name for a Tor hidden service we first need to generate a new 1024 bit RSA key just as Tor would do:

generateKey() returns a Promise that resolves to the new key pair. The second argument specifies that we want the key to be exportable as we need to do that in order to check for pattern matches. We will not actually use the key to sign or verify data but we need specify valid usages for the public and private keys.

To check whether a generated public key matches a specific pattern we of course have to compute the hash for the .onion URL:

We first use exportKey() to get an SPKI representation of the public key, use digest() to compute the SHA-1 digest of that, and finally pass it to base32() to Base32-encode the first half of that digest.

Note: base32() is an RFC 3548 compliant Base32 implementation. chrisumbel/thirty-two is a good one that unfortunately does not support ArrayBuffers, I will use a slightly adapted version of it in the example code.

The only thing missing now is a function that checks for pattern matches and loops until we found one:

We simply use generateRSAKey() and computeOnionHash() as defined before. In case of a pattern match we export the PKCS8 private key information, encode it as Base64 and format it nicely:

Note: base64() refers to an existing Base64 implementation that can deal with ArrayBuffers. niklasvh/base64-arraybuffer is a good one that I will use in the example code.

What is logged to the console can be directly used to replace any random key that Tor has assigned before. Here is how you would use the code we just wrote:

The Promise returned by findOnionName() will not resolve until a match was found. When generating lots of keys Firefox currently sometimes fails with a “transient error” that needs to be investigated. If you want a loop that runs despite that error you could simply restart the search in the error handler. 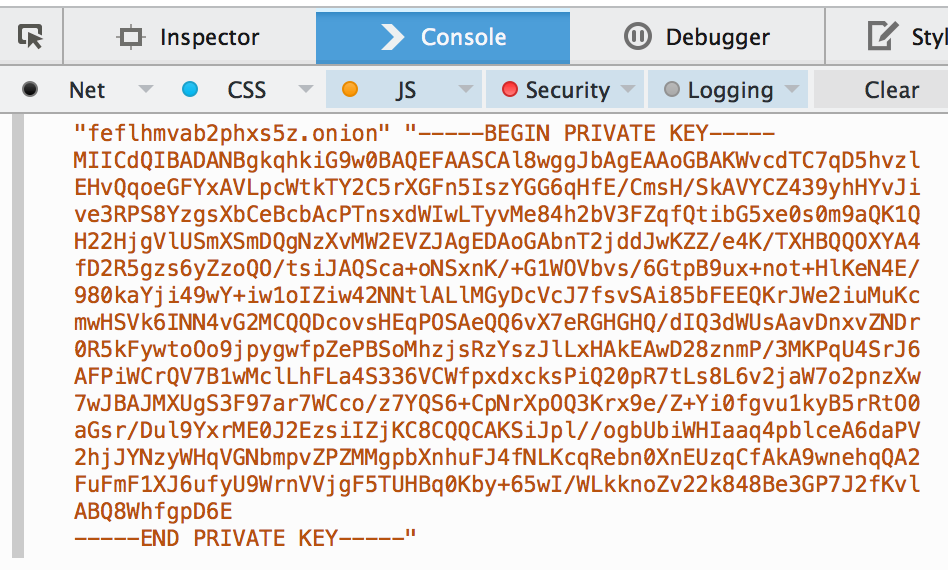 Include it in a minimal web site and have the Web Console open. It will run in Firefox 33+ and Chrome 37+ with the WebCrypto API explicitly enabled (if necessary).

As said before, the approach shown above is quite naive and thus very slow. The easiest optimization to implement might be to spawn multiple web workers and let them search in parallel.

We could also speed up finding keys by not regenerating the whole RSA key every loop iteration but instead increasing the public exponent by 2 (starting from 3) until we find a match and then check whether that produces a valid key pair. If it does not we can just continue.

Lastly, the current implementation does not perform any safety checks that Tor might run on the generated key. All of these points would be great reasons for a follow-up post.

Important: You should use the keys generated with this code to run a hidden service only if you trust the host that serves it. Getting your keys off of someone else’s web server is a terrible idea. Do not be that guy or gal.